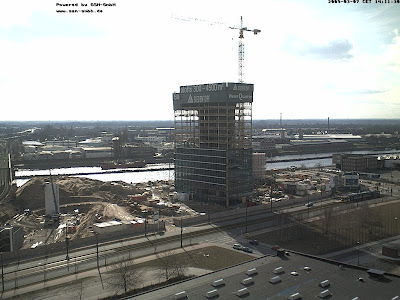 Germany - Alemanha - Bremem
The Weser Tower is a multistoried building designed by the US-American architect of German origin Helmut Jahn, which is currently built in the context of the town development in the overseas city in Bremen.
The 22 floors of the building have a surface of 18,000 square meters and thus place for 800 jobs. Among this large-scale project rank also a new hotel, a Varieté theatre, restaurants and further office buildings. Principal tenant are subsidiary companies of the power supplier EWE AG, which takes over altogether 13 floors of the building.
The laying of the foundation was on 23 October 2007. The Tower of 82 meters height will be the tallest office building of Bremen in the future and is supposed to be completed in 2009.
http://85.16.71.187/control/userimage.html
Posted by Flavio Cassiano at 10:14 AM